This Wednesday we celebrate the feast of the Birth of Mary, the mother of Jesus. Have we missed the beat with Mary?

She appears, is named only a few times in the Gospel.

Many of the litanies and names of Mary were composed to hold a mirror up to Jesus and to name Mary.

For example Jesus is called the Redeemer, and so Mary is the co-Redemptrix.

By many, Jesus is called King, and so Mary is named as Queen (every King has to have a Queen, however the Son/Mother relationship does cause some questions?).

Mary appears by name in the Synoptic Gospels and in the book of Acts. Luke contains the most references to Mary and places the greatest emphasis on her role in God’s plan.

Mary is mentioned by name in the genealogy of Jesus, in the annunciation, in Mary’s visit with Elizabeth, in the birth of Jesus, in the visit of the wise men, in Jesus’ presentation in the temple, and in the Nazarene’s rejection of Jesus.

In Acts, she is referred to as “Mary, the mother of Jesus” (Acts 1:14), where she participates in the community of believers and prays with the apostles.

The Gospel of John never mentions Mary by name, but refers to the “mother of Jesus” in the account of the wedding at Cana (John 2:1–11) and standing near the cross at the crucifixion (John 19:25–27).

(One author I once read suggested that Mary may well have appeared more often outside of the Gospels than within them!)

Mary is hardly present throughout the ministry of Jesus, or at least she is not named as being present.

Might I suggest that her not being present, or at least not being named is in fact her biggest being there!

What Jesus learned as a human person he learned from his human family, namely his mother, his human father, maybe his siblings, his grandparents, the village folk in Nazareth, and what he learned from living with a group of twelve sometimes, grumpy men.

Who knows the name of Pope Francis mother?

Who knows the name of the mother of Nelson Mandela, Martin Luther King jr, Mahatma Gandhi?

The “absent” mother is present in the son!

I, along with many others of my generation, grew up with a Mary imaged from art and sculpted statues; a virginal young girl, not a wrinkle to be seen, her hands clasped in front of her, her white garment without a stain or wrinkle, and a blue veil.

That all changed me on my journey through the Holy Land in 1984.

It was late August, brutally hot, sandy and arid.

I remember lying in bed one evening after a full days tour and suddenly realizing this was the environment in which Jesus, Mary, Joseph and all those I had become familiar with through the Gospel stories, had lived and grown up in.

How could Mary have had snow white, wrinkle free skin in such a climate?

How could her feet have remained like a porcelain doll walking dusty tracks, carrying heavy vases of water from the well; gathering wood for the fire would not do the fingernails any good!

And I might well imagine the harsh sun and wind chiselled a weather-beaten face to her complexion.

For the record, I didn’t see a blue veil my entire journey through the Holy Land, so where did we get blue from?

The answer is ridiculously simple.

The rarity and difficulty of accessing blue pigment encouraged civilisations to imbue the colour with mystical properties.

In Christian iconography, blue became one of the most sacred colours.

The religious connotations of the pigment were also because it was so expensive.

Artists preserved the most costly colours for important religious subject matters, like the Virgin Mary. A particular shade was even named after her, ‘Marian blue’.

So, once again, Mary has become “costly” and “expensive”.

Would she have wanted that?

When reading the lives of saints my attention is often caught by how many, especially women saints, have come from a poor, uneducated background.

So too Mary, a poor village, and given the culture, she grew up uneducated.

The question I hold is this, have we in our attempt to give due and proper reverence to Mary as the Mother of our Saviour we have unwittingly made of her a model inaccessible to the young women of today.

The image I offer is my personal favourite Of Mary.

The actual painting has nothing to do with Mary. Rather, it is a detail by the Dutch artist Peter Paul Rubens.

The painting is titled “Old Woman With A Basket Of Coal”, painted between 1616 – 1618. In most of our artistic representations of Mary she is never allowed to grow old!

Well, here she is with lines of toil, of dirt, of searing heat, of relentless toil. H

owever, take a moment to stare into here eyes; you may well see grace, wisdom, understanding and compassion.

You may just well be looking into the eyes of her Son. 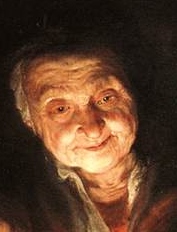