Ascension Sunday  – that moment when it came time for Jesus the Christ to conclude his earthly ministry and return to his place with his Abba/Father.

I would invite you to reflect on two “other than” paintings of this moment of Ascension.

The first is titled, “The Ascension of Christ” and is by the German artist Hans Suess Von Kulmbach. Painted in 1513, the picture now hangs in The Metropolitan Museum of Art, New York, NY. 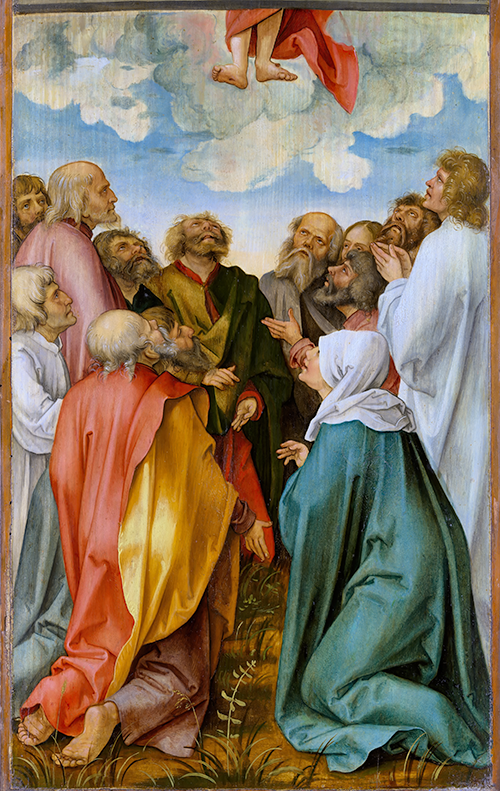 What I find striking is very little of the ascending figure of Jesus, the Christ, is visible – shins and a pair of bare feet! What is in sharp focus is those gathered to farewell Jesus.

Maybe, that is the point of the Ascension story; not the one departing rather those staying!

This is highlighted by the second artwork. Painted sometime in the 18thC  by Hans Stiegler, it is part of a diptych on the North Gallery of the Amandus Church, Freiberg, Germany.

Certainly, more of the person of Jesus the Christ is visible, however, a close inspection of the painting reveals something extraordinary – He is leaving his shoes behind!

The 16th C Spanish mystic St. Teresa of Ávila may provide us with an answer. There is a prayer attributed to Teresa which is printed under the title, “Christ has no body now but yours”. The prayer reads

Maybe, the shoes have been left for us to fill, and rather than looking skyward, we are invited to step into the shoes of the other!

Take a moment to recall when your best friend invited you home to their place for the first time . . . . my guess is something in the relationship changed! You were no longer one a group of kids hanging out at school, sitting together and eating lunch, playing together in the playground, sitting in the same classroom. No, now you met her Mum and Dad, any siblings your friend may have had, the family pet. More than likely you spent some time in your friend’s bedroom, saw where they slept, the cover of the duvet, what your friend had stuck on their wall! In a real sense, you “knew” them in an extraordinarily different way. You had been inside their world!

This Sunday’s Gospel (Jn. 14:23 – 29) has this most beautiful of phrases, “we will come and make our home in you.” The question I hold is quite simple: do I truly believe that? For many reasons that truth has been forgotten. Now, many people go and “make a visit” before the Blessed Sacrament; many Churches have a celebration called, Exposition where the Blessed Sacrament is ‘exposed’ for a period of time, (during the COVID lockdown one Bishop recommended people drive their car to their local Church, sit in their car outside and so ‘make a visit’! I need to declare that when I read that, I quite literally cried! What an insult to the indwelling of Christ in the baptised person, “Christ lives in me” exclaims St Paul in his letter to the Galatians (2:20). But, we protest, He is not as real as He is in the Blessed Sacrament; locked behind a door in the Tabernacle, or exposed in a glittering monstrance upon the altar. How, I ask, can the Risen Christ be more real! Please, do not do the Risen Christ such a disservice.

Of course, having someone come and “make our home in you” bespeaks presence, immediacy and intimacy; a “visit” means coming and going, a much safer option! Making our home in you declares putting down roots.

For the next several days in our liturgy the readings selected make reference to the Holy Spirit, the promised Helper or Comforter. This is because in two weeks’ time there will be the great feast of Pentecost. The Spirit will come not just for a visit but to remain with us.

What kind of comfort can we expect from the Comforter? Look more closely at the word ‘comfort’. Modern usage has weakened its meaning to softness and gentle touches. We have in fact a fabric softener called ‘Comfort’!; in fact the word  has come to mean just about the opposite of its real meaning! The word comes from the Latin confortare, which means ‘to strengthen’; fortis means ‘strong’. Comfort therefore means strength! The Holy Spirit will make us robust.

Our future is unknown and that may be unsettling, however we have not been abandoned. Jesus tells us not to let our hearts be troubled or afraid. (The phrase “do not be afraid” occurs 365 times in the Bible. (Once for each day of the year!) If we open ourselves and allow ourselves truly to experience God’s presence, then our hearts can be nourished by the gift of peace – God’s peace, a peace the world cannot give.

To quote the 13th century Dominican theologian and mystic Meister Eckhart, “You need not seek Him here or there, God is no further than the door of your heart; there He stands patiently awaiting whoever is ready to open up and let Him in. No need to call to Him from afar: He can hardly wait for you to open up. He longs for you a thousand times more than you long for Him.”

None more so than, “Love one another as I have loved you.”

In his book, Miracle on the River Kwai, Gordon describes a very moving incident in which British prisoners of war tend the wounds of injured Japanese soldiers and feed them.

The Japanese are encrusted with mud, blood, and excrement.

Their wounds are sorely inflamed, and they are left uncared for by their own people.

The British prisoners see them, take pity on them, bathe their wounds, and give them a little food to eat.

They care for their enemies who have starved and beaten them, killed their comrades. Love can work miracles and break down barriers because it is truly the power of God.

St John writes, “Beloved, let us love one another because love is from God.” It works in our schools and workplaces and homes and families.

As a baby learns to smile in response to the smiles of its parents and learns language by being spoken to, so the very possibility of love, let alone its vocabulary and gestures, can only be learned in response to the love that finds us first, finds us before we even know what or who it is that has loved us.

And so it is with us spiritually.

We love as we are loved, and Jesus makes the new commandment possible because of the radical way in which he has loved us; absolutely, unconditionally, without reserve.

Winnie the Pooh, is a  fictional teddy bear created by English author A. A. Milne.

At one point Piglet enquires of Pooh, “How do you spell love?” to which Pooh responds, “you don’t spell it, you feel it.” And might I add, ‘you do it’ which is what we are celebrating these weeks of Easter – love as a verb! 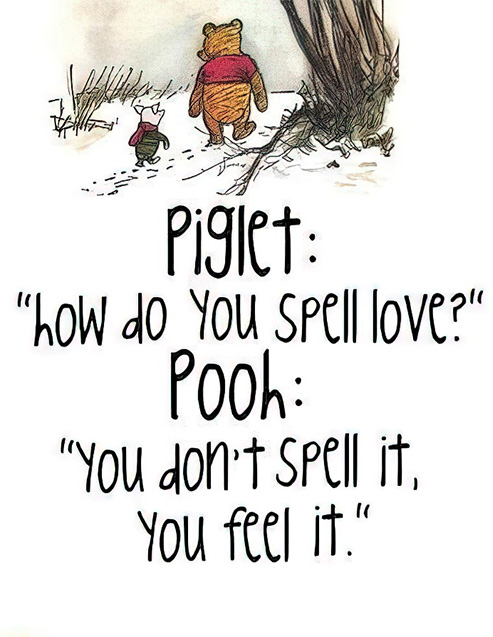 The 13th-century Persian poet Rumi reminds us, “love cannot be described it must be tasted”.

John Clayton Mayer is an American singer, songwriter, and has a song with a simple and yet profound title, “Love is a verb.”

Love ain’t a thing
Love is a verb

Let’s be honest now – most homilies/sermons, whatever you wish to call them, are forgotten!.

There is the rare occasion when one might just be worth recalling, talking about in the car on the drive home, or over the morning cuppa, or perhaps telling to another.

Goodness, I have been offering such homilies/sermons now for 44 years and I cannot remember what I said!

Until I began these postings, I would never write out a sermon. The temptation then is to file it away and use it again.

Preaching from the Yellow Pages!

However, I am a great gatherer of stories that might provide a ‘stepping off point’ for my own and for others reflections.

I recall a time when I was studying in the US, and was present at a Sunday Mass in the Diocese of Trenton, NJ. The Gospel of the day was the gospel we proclaim today, about the Good Shepherd. (Jn. 10: 27 -30). It is, somewhat surprisingly no more than four verses long, however further proof that the best things come in small packages! The homilist began with these words:

“There was a practice among shepherds in Israel that existed at the time of Jesus and is still in use in parts today that needs to be understood in order to appreciate what Jesus says about God as the Good Shepherd. Sometimes very early on in the life of a lamb, if a shepherd senses that this particular lamb is going to be a congenital stray and forever be drifting away from the herd, he deliberately breaks its leg so that he has to carry the lamb until its leg is healed. By that time, the lamb becomes so attached to the shepherd that it never strays again!”

Through quite an extensive search I have found no evidence that such a practice ever existed, and in truth, for me anyway, sounds rather barbaric.

However, it has provided me with some worthwhile reflection. I am of the period when “you put on your Sunday best” to go to Church on a Sunday (and of course Holy Days of Obligation). The ‘dressing up’ I consider an important symbol – a symbol of bringing to your  ‘good self’, your ‘washed and polished self’, a self that would ‘prove acceptable’ in the presence of your God

When I read and reflect on the Gospel stories, I notice it is the broken people who come to Jesus, (deaf, dumb, blind, lame, issue of blood, demon-possessed, and many more). They arrive ‘in their brokenness’ and leave healed, some even leave their sleeping mat where it lies.!

Maybe there is a deliberately “broken bit” in me that actually is my conduit into my relationship with Jesus.

I, through my silly theology have desperately tried to hide away this “broken bit” to present an acceptable and pleasing face to Jesus.

The question may well be: will I let Jesus carry me, with my broken pieces, until I am healed?

Today is the World Day of Prayer for Vocations. Let us not reduce this day of prayer to a day of prayer for a select few discerning a call to the religious life, or to ordained ministry. Let us be broad and expansive in our prayer. Let us pray for a listening ear and a generous heart for women and men throughout our world, attentive to the vocational call of the Good Shepherd – a call to the single life, to life lived in the commitment of married love, to a life lived through the vocation of religious life, to a life lived through the vocation of ministerial priesthood. Let each of us hear again the foundational call of Christian women and men through the Baptismal grace which names us daughters and sons of God.