“Do you love me?” Jesus asks Peter.

Jesus asks Peter the question three times and some commentators suggest the three questions may mimic the threefold denial of Peter in the courtyard as Jesus is led to his trial, ample food for reflection.

Personally, I consider Peter very lucky to get away with three questions, I am being asked that daily!

However, I wish to draw our attention to a detail that might get overlooked in our shoreline activity.

“Have you caught anything, friends?” Jesus calls out, and when the answer comes back a resolute, “no”, his call is to throw the net out to the right side. There is a similar instance in Luke’s Gospel (Lk. 5: 1 -11). 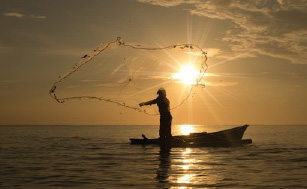 In the past, ships used to have rudders on their centre line, and they were controlled using a steering oar. As it is the case today, back then as well the majority of the people were right-handed. Thus, as most of the sailors were right handed, the steering oar used to control the ship was located over or through the right side of the stern.

For this reason, most of the seafarers were calling the right side as the ‘steering side’, which later was known as ‘starboard’. The word ‘starboard’ is the combination of two old words: stéor (meaning ‘steer’) and bord (meaning ‘the side of a boat’).

When casting out and hauling in fishing nets, the left (port side) would be used to prevent entanglement with the steering.

What Jesus is inviting/challenging the disciples in the boat to, is to do the complete opposite to what all their training and skills have imbued in them from a lifetime on the water – risk entanglement, risk losing the ability to steer!

As our Church continues in its process of Synodality, maybe todays Gospel has a strong image and metaphor for us all, namely dare to risk entanglement, to risk the inability to steer! Also, the port side is precisely that – the side nearest home, home being (for most) a place of security, safety and warmth. Jesus’, call from the shoreline is to do the exact opposite – to go fishing in places of insecurity, in unsafe places, in places without the comfort of warmth.

What do a Dutchman living in France, an Englishman living in Ireland and a Frenchman living on a Pacific atoll have in common? I suggest two attributes. The first is – they became better known, and one might say ‘famous’ after they had died!

The Dutchman living in France, Vincent Van Gogh, never sold a painting in his lifetime. He would send them to his younger brother Theo, an art dealer in Paris. Theo sent painting materials as well as monthly financial support.

The Englishman living in Ireland, Gerard Manley Hopkins had none of his poems published in his lifetime. Hopkins would send his poems to his long-time friend Robert Bridges.  Bridges became literary executor of Hopkins’ poems, which he kept collectively from the public until 1918, twenty-nine years after his friend’s death, when he edited ‘Poems of Gerard Manley Hopkins’ for publication.

The French man living on a Pacific atoll was Peter Chanel. Father Peter Chanel, a member of the newly formed religious congregation known as the Society of Mary was one of an early group of Catholic missionaries to the South West Pacific which set out from France in December 1836. Father Chanel and a Marist catechist Brother Marie-Nizier were placed on the island of Futuna, north of the Fijian Islands, in November 1837. They both laboured there for three and a bit years. It was a difficult mission: learning the language, coping with isolation, different foods and customs.

On 28th April 1841 Peter Chanel was killed by a group of warriors incited by the leading chief of Futuna, in hatred of the Faith which threatened his control over the people. Following Peter Chanel’s death, the entire island of Futuna converted to the Catholic Faith.

The second common attribute may be more helpful for us – they did their best work away from home!

In a book titled, “The Hero with a Thousand Faces” the author, Joseph Campbell presents a ‘monomyth’. Campbell worked in comparative mythology and comparative religion. Campbell explores the theory that mythological narratives frequently share a fundamental structure. The similarities of these myths brought Campbell to write his book in which he details the structure of the monomyth. He calls the motif of the archetypal narrative, “the hero’s adventure”.  The first step in this ‘monomyth’ is that hero/heroine leaves home – that is, leaves a place of safety, security, warmth, nourishment, and familiar social relationships.

A classic example of leaving home is found in J.R.R. Tolkien’s, “The Fellowship of the Ring” as Bilbo Baggins sets off, ‘Well, that’s that,’ he said. ‘Now I’m off!’ Bilbo chose his favourite stick from the stand; then he whistled. Three dwarves came out of different rooms where they had been busy.

‘Is everything ready?’ asked Bilbo. ‘Everything packed and labelled?’

‘Well, let’s start then!’ He stepped out of the front door.

It was a fine night, and the black sky was dotted with stars. He looked up, sniffing the air. ‘What fun! What fun to be off again, off on the Road with dwarves! This is what I have really been longing for, for years! Goodbye!’ he said, looking at his old home and bowing to the door. ‘Goodbye, Gandalf!’

‘Goodbye, for the present, Bilbo. Take care of yourself! You are old enough, and perhaps wise enough.’

‘Take care! I don’t care. Don’t you worry about me! I am as happy now as I have ever been, and that is saying a great deal.

Might those words been on the lips of Peter Chanel as he walked up the gangplank onto the Delphine and sailed from Le Havre, “well let’s start then!.”

The feast of St. Peter Chanel, maybe less about his martyrdom, which few of us will be in a such a position; rather the feast is about daring to leave the security of home – “ well, let’ start then”, and choosing our favourite stick, stepping out the front door, and with Bilbo we sing, ‘the road goes ever on and on, down from the door where it began!”

If you are looking for a way to idle away a couple of hours (or more if you are really keen), in your internet search engine type in an entry that goes something like, “the Resurrection of Christ in Western Art.”

There will, of course, be many, many entries, however, they will have substantial similarities with each other, and that similarity is that Christ is ‘going up’ and away, and is usually alone; with those daring to hang around scared out of their wits.

An example is the oil painting by Anthony Van Dyck.

Painted c 1631 – 32, the oil hangs in The Wadsworth Atheneum an art museum in Hartford, Connecticut. 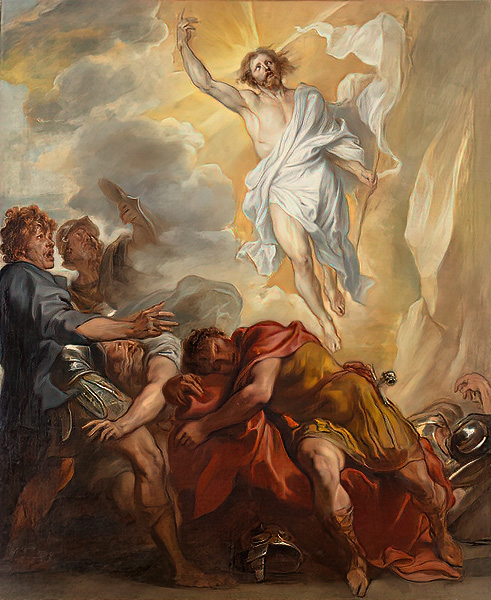 If, on the other hand, you do a similar search and change just one word a great secret is revealed.

The change is from ‘Western’ to ‘Orthodox’.

The secret, at least for many Western Christians is hidden in the other half of the universal church, in places like Syria, Turkey, Greece, and Egypt; the Eastern Orthodox.

In the Eastern Orthodox tradition, Easter is not usually painted with a solitary Jesus rising from the dead.

Jesus is always surrounded by crowds of people—both haloed and unhaloed.

In fact, in traditional icons, Jesus is pulling people out of Hades.

Hades is not the same as hell, although we put the two words together, and so we grew up reciting in the creed that “Jesus descended into hell.”

Instead, Hades is simply the place of the dead.

There’s no punishment or judgment involved. It’s just where a soul waits for God. But we neglected that interpretation.

So, the Eastern Church was probably much closer to the truth that the resurrection is a message about humanity.

It’s a message about history.

It’s a corporate message, and it includes you and me and everyone else. If that isn’t true, it’s no wonder that we basically lost interest. 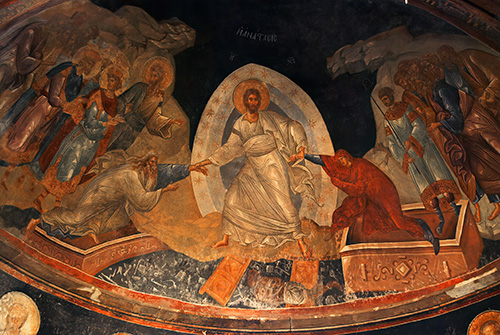 An example is a fresco in the Chora Church in Istanbul, Turkey, (c 14th C).

Take a moment to look at the different energy of the persons in both illustrations; in the Van Dyck oil, the Risen Christ is heading up and away from; those present are cowering not in awe, but rather in fear.

In the Orthodox fresco, Christ is descending, and persons are clamouring for a touch, to be taken hold up, to be lifted out of that which holds them in place, inert.

Allow the Risen Christ to ”descend” to those places in my life which hold me bound; reach out, and be taken by the hand to a new and life-giving place.

In the third book of JRR Tolkien’s Lord of the Rings trilogy there is a scene that captures something of the joy experienced by the disciples when the resurrected Jesus appeared to them.

The realm of the Dark Lord, Sauron has been destroyed, and against all hope the world has been saved, at least for the time being.

Frodo, the hobbit, and his faithful servant and friend, Samwise, have also been saved. Sam wakes up, smells wonderful perfumes and sees Gandalf, the wizard he thought was dead. Sam gasps,

“Gandalf! I thought you were dead! But then I thought I was dead myself. Is everything sad going to come untrue?”

“A great Shadow has departed,” said Gandalf, and then he laughed, and the sound was like music, or like water in a parched land; and as he listened the thought came to Sam that he had not heard laughter, the pure sound of merriment, for days upon days without count. It fell upon his ears like the echo of all the joys he had ever known. But he himself burst into tears. Then, as sweet rain will pass down a wind of spring and the sun will shine out the clearer, his tear ceased, and his laughter welled up, and laughing he sprang from his bed.

“How do you feel?” he cried. “Well, I don’t know how to say it. I feel, I feel” – he waved his arms in the air – “I feel like the spring after winter, and the sun on the leaves; and like trumpets and harps and all the songs I have ever heard!”

Indeed, the feast we celebrate today does feel like Spring after Winter, and the sun on the leaves. “He is Risen.” 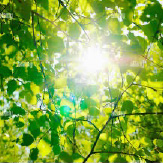