However, both the shepherds and the wise men are important to our story of the in-breaking of God into our world in the person of Jesus, the Word made flesh.

The shepherds were Jews, the wise men (or Magi) were non-Jews, or Gentiles.

The word epiphany means a manifestation or revelation. Literally, ‘a drawing back of the veil.’ On this day the veil is drawn back on a great mystery, namely, that Christ is the Saviour of all people.

Today is the feast of inclusivity.

It is God’s will that all people be saved and come to the knowledge of the truth. God invites all to share on equal footing the benefits of the saving actions of Christ. This feast shows that election by God is not a privilege for some, rather a hope for all. It puts an end to every kind of exclusiveness.

In Jesus own mission he reached out to those excluded by the society in which he lived, the poor, the diseased, women and children.

He reached out to Samaritans, Canaanites, foreigners, and every manner of social outcast.

He angered the Jewish leaders by telling them that the Kingdom of God was open to everyone. The news that the Gentiles would be accepted on equal terms as themselves caused shock and bewilderment to the Jewish leaders. This great and wonderful truth was revealed in embryo when the Magi came to honour the Christ child.

Are all welcome, as equals, in our Church, irrespective of race, gender, age, sexual preference, ability or disability? If not, why not? Is the barrier not in them; rather, might it be in me?

Towards the conclusion of Matthew’s gospel, Jesus is in discussion with the chief priests and elders, and they are questioning his authority. The discussion concludes with these words of Jesus, “Truly I tell you, the tax collectors and prostitutes are going into the kingdom of God ahead of you. For John came to you, in accordance with God’s covenant plan, and you didn’t believe him – but the tax collectors and prostitutes believed him. But when you saw it, you didn’t think better of it afterwards and believe him. “ (Mtt. 21: 31-32) 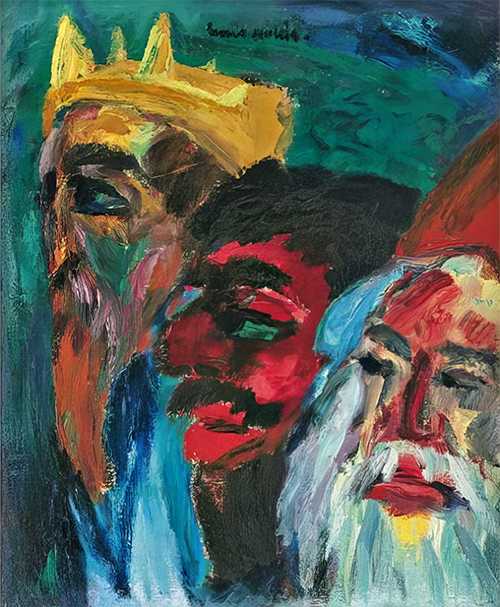 The magi (‘wise men’) were traditionally astrologers of the Persian court and priests of the cult of Mithras, but were later redefined as kings, based on a similar story of royal gift-giving in the Old Testament (Psalms 72:10).

In the early Middle Ages (by about 750), they were given names, Caspar, Melchior and Balthasar, and were said to come from the kingdoms of Tarshish, Sheba and Seba (Seba was thought to be an ancient name for Ethiopia).

From about the 15th century, Balthazar, the black magus/king associated with Ethiopia became a familiar figure in European images of the Adoration of Christ at his birth.

From the fourteenth century, it was customary to differentiate the Magi between their ages, representing one as youthful, one as middle aged, and one as elderly.

From the fifteenth century, especially in German and the Netherlands, one was frequently portrayed as a moor.

Thus, they implicitly acquired the persona of the three Ages of Man and the three Continents of Asia, Europe and Africa. (G. Schiller, Iconography of Christian Art, vol. 1, London 1971, pp.94-114).