Excited for two reasons; Billy had heard his parents talk of the city and yet had no idea where it was, and second, it meant travelling on the train, which Billy had never done.

The day arrived, and Billy presented himself at breakfast in his Sunday best. His father and he walked to the train station and duly caught the train. Billy sat by the window and watched cows and sheep and corn and maize go whizzing by.

When his father had finished his business, he asked Billy if there was anything he would like to do.

Now, back at school, Billy had seen a picture of St Brendan’s Cathedral which was here in this city, and so he asked his father whether they could go and have a look inside.

Now St Brendan’s was a very, very, very old cathedral, built when there was still kings and queens and princes and princesses and knights in armour and ladies in waiting.

Inside, the cathedral was dark and cold, and a little spooky.

Billy was a little bit scared and held his father’s hand tight as they walked around.

The walls inside were very high and right at the top, there were stained glass windows all the way around.

Others he had knew heard of, like St Finbar, St Brigid and St Cairan.

As he walked around looking at all the windows an amazing thing happened.

Outside, the clouds broke, and the sun streamed through the stained-glass windows and suddenly the inside of the church was bathed in light.

(If you want to you may spell the word either sun or Son.)

This Sunday the Thirty First Sunday of Ordinary time, provides those preparing the liturgy something of a conundrum – namely, do we choose readings specific to Mission Sunday, or do stay with the readings set down for the Sunday? (of course, in truth, any reading chosen is a reading about Mission!)

In this Gospel Jesus is asked, ‘which commandment is first.’

A question, in fact, that at the time was quite pointed.

It required of Jesus a response that meant that he knew both his Torah (the First Testament which we call “Old”) and that he had been properly taught by his parents.

Mary and Joseph had indeed taught him well.

There is little doubt that Jesus would have prayed this prayer with his Mum and Dad (remember those nights on your knees in the front room praying the Rosary).

However, Jesus goes on to add, “you shall love your neighbour as yourself.”

Where did he learn this?

Remember all those add-ons after the Rosary had finished, were in fact of equal importance.

The two became one, as Jesus says, ‘there is no other commandment (singular) greater than these (plural).

One of his mottos suggest to me he had spent quite a deal of time on his knees in the front room of a certain residence in a small village by the name of Nazareth.

Arrupe writes, “Nothing is more practical than finding God, that is than falling in love in a quite absolute final way.

“What you are in love with, what seizes your imagination, will affect everything.

“It will decide what will get you out of bed in the morning, what you do with your evenings, how you spend your weekends, what you read, who you know, what breaks your heart, and what amazes you with joy and gratitude.

“Fall in love, stay in love, and it will decide everything.”

This Sunday’s responsorial psalm contains these beautiful words: ‘Those who are sowing in tears will sing when they reap. They go out full of tears carrying seed for the sowing; they come back full of song, carrying their sheaves.’

Anyone who has done, and who still does, any gardening, knows that the antithesis of tears and song is not so far off the mark. When I was in ministry in Hastings, I started a vegetable garden. The soil is so rich in the area they would say, ‘if you plant an ice block stick, it will grow!’

They neglected to mention oxalis and convolvulus also grow.

Sowing is a beautiful occupation, but it calls for hard work: the ground needs be prepared, the seed sown, then there is regular watering and aftercare.

The first green shoots bring an up-tempo beat of the heart (and if you are like me, a moistening of the eye!)

Then, after time, there is the delight in digging the new season’s potatoes, or a lettuce, cabbage, carrot, whatever.

Many of the great artists we admire know well the tears of sowing.

During his life, Vincent experienced poverty, loneliness, and much illness. At times life was so difficult for him that he felt he couldn’t go on.

Once he said, ‘It is getting too lonesome, too cold, to empty.’ Van Gogh’s greatest heartbreak was a failure to win recognition as an artist.

Most people who knew him considered him a failure.

He was only thirty-seven when he died and by then he had sold only one of his paintings. It was sold for a few hundred Francs.

He said, ‘Painting requires a lot of faith because one cannot prove at the outset that it will succeed.

“In the first years of hard struggling, it may even be a sowing in tears. But we shall check them because in the far distance we have a quiet hope of the harvest.’

In spite of everything, he persevered. And the harvest did come, though too late for him.

The day after his death a few of his friends came and decked out the small room where his coffin lay with some of his paintings. It was only then that they realized how beautiful those paintings were. Today his canvasses are almost beyond price.

May the words of Vincent van Gogh, ‘Life is only a kind of sowing; the harvest is not here,’ echoing the words of today’s Psalm, ‘sowing in tears, they will sing when they reap’ fall on rich soil.

Footnote: Van Gogh had a special interest in sowers throughout his artistic career. All in all, he made more than 30 drawings and paintings on this theme. 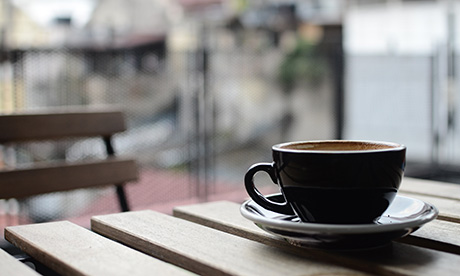 One of my favourite TV programmes is called “A Touch Of Frost”.

The programme is a detective series initially based on the Frost novels by R.D.Wingfield.

The series stars David Jason (of Open All Hours fame) as Detective Inspector Jack Frost an experienced and dedicated detective who frequently clashes with his superiors.

In his cases, Frost is usually assisted by a variety of different detective sergeants or constables.

While each episode deals with happenings like, murder, abduction, robbery, missing persons and the like, there is a minor motif at play in each episode and indeed throughout the series – Jack Frost pinches a sip from or the entire cups/mugs of drink of others!

Whether it be the desk sergeant, the police archivist, or the fellow detectives working immediately with Detective Inspector Frost having a drink nearby is not a sensible option.

The viewer decides for themselves what is in the cup/mug – is it tea, coffee, Milo, Bovril, fruit juice, cold water, hot water?

And, like Jack Frost one becomes aware of the contents of the cup/mug only when we have taken a sip!

By then it is too late! We have supped!