This Sunday we read from the first book of the Bible, the Book of Genesis.

We read of the creation of the first persons, Adam and Eve.

When we read from this book it is helpful to remember we are in the field of myth.

The encyclopedia Britannica defines myth as:  a symbolic narrative, usually of unknown origin and at least partly traditional, that ostensibly relates actual events and that is especially associated with religious belief.

The signpost will have a name on it, Halfmoon Bay, or Nelson St.

The sign is not the street; however, it does point us in the right direction.

Our Christian theology teaches us that God is a relationship of three persons to the point of forming one being, which we have named the Trinity.

Our Christian theology also teaches that the human person is made in the image of God, “imago Dei”.

As a consequence, might I suggest that at the heart of God’s creative instinct is not a him, or a her, rather at the heart is relationship.

Our Biblical text has the man being the first born.

When we talk in sequence there need always be a first and a second and a third etc.

This sequence does not talk of better than, of superiority.

In our counting system one comes before two, however two is bigger because it is twice one!

So, I would like to posit for consideration the myth/story of the creation of the first persons is a story about complimentary energies, one masculine, one feminine.

These two energies working together in relationship.

The Russian philosopher Nicholas Berdyaev writes: [Man] is not only a sexual, but a bisexual being, combining the masculine and the feminine principle in himself in different proportions and often in fierce conflict.

A man in who the feminine principle was completely absent would be an abstract being, completely severed from the cosmic element.

A woman in whom the masculine principle was completely absent would not be a personality. (The Destiny of Man, NY Harper Torchbooks,  1960, p 61).

One of the most telling images of these complementary energies is in Rembrandt Von Rijn’s painting with the title The Return of the Prodigal Son.

It is an oil painting,  part of the collection of the Hermitage Museum in St. Petersburg.

It is among the Dutch master’s final works, likely completed within two years of his death in 1669. 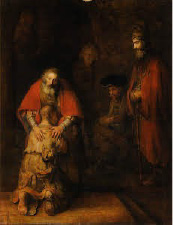 When I spend time with the painting and look at the hands of the father on the shoulders of the kneeling son, I notice there is a distinct difference in the structure of each hand. 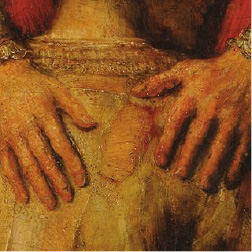 The father’s left hand (right hand when viewing the image) touching the son’s shoulder is strong and muscular.

The fingers are spread out and cover a large part of the son’s shoulder and back. How different is the father’s right hand (left when viewing the image).

This hand does not hold or grasp.

Rather, it appears to be laid gently, almost a caress.

It is refined, soft, and very tender. It is a mother’s hand.

The caressing “feminine” hand of the father parallels the bare, wounded foot of the son, while the strong “masculine” hand parallels the foot dressed in a sandal.

Is it too much to think that the one hand protects the vulnerable side of the son, while the other reinforces the son’s strength and desire to get on with his life.

Has Rembrandt used his own experience of God in creating this masterpiece?

Has Rembrandt experienced the strong supportive presence of the “masculine” God, and also the gentle comforting caress of the “feminine” God?

Of course only Rembrandt can answer those questions when asked of him; however they may also be asked of you, and then, only you can answer!