Before the invention of printing, the Gospels and other holy writings were copied out by hand.

Conscious of the intrinsic and spiritual value of a book many laborious hours were spent copying and ornamenting these manuscripts.

In a darkened room at Trinity College, Dublin one such manuscript is on display. It is the 1200-year-old Book of Kells.

It is quite possibility the richest, most copiously illuminated, manuscript version of the four Gospels in the Celto-Saxon style that still survives.

The black ink script is complemented by richly coloured paints and ornamented with fantastic abstract animal and human forms.

Walking around these vellum folios (pages) several observations came to my mind.

For all its fame, surprisingly little is known about the Book of Kells.

Its place of origin is contested; for some it was begun on the island of Iona and brought to Kells (County Meath) when the abbey was founded by St Columba around the 6thC, AD.

Others maintain the origin of the manuscript is the Abbey of Kells itself.

We do not know who the copiers and illustrators were!

Similarly, there is somewhat of a disparity between the consummate draughtsmanship of the decorations and the crudity of the portraits of the human figures.

The figures are quite naïve!

Was this done on purpose – the figures too holy to be drawn with fidelity to the human form?

Then there is the text itself; the pages which introduce each of the Gospels are swamped with quite dazzlingly beautiful and elaborate illuminations, that unless you knew the beginning of each Gospel you might well struggle to understand the text. And maybe, just maybe, this has been done on purpose, namely, as an invitation to the individual to approach the text not with the mind open, rather with the heart ready?

As one with the privilege and responsibility of proclaiming God’s Word, am I guilty of such decoration, such embellishment, that the Word is lost? 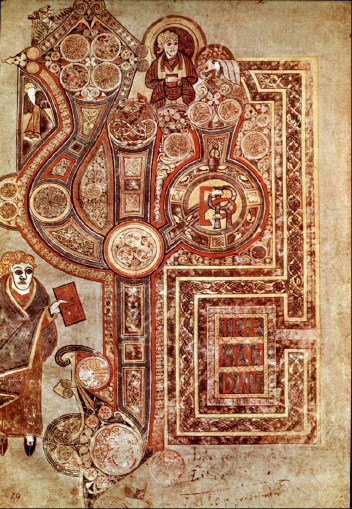 The image is the folio (29R) of the opening words of St. Matthew’s Gospel from the Book of Kells. The Gospel of Matthew begins, “an account of the genealogy of Jesus.”

In Latin the text reads, “Liber generationis”. So, apparently does this page from the Book of Kells!!