A maiden speech is the first speech given by a newly elected or appointed member of a legislature or parliament.

The maiden speech is an opportunity for new MPs to make a strong start and set the tone for their time in Parliament.

New MPs get 15 minutes for their maiden speech.

This gives them time to cover a range of topics.

Typically, MPs talk about their hopes and aspirations for their time in Parliament and what they hope to achieve.

Maiden speeches usually have a deeply personal element, with MPs mentioning their upbringing, the beliefs and values that prompted them to enter Parliament, and the character of the community they represent.

You’ll see some MPs wear cultural dress or other items of personal significance to reflect their background.

Two men unroll parchment scrolls, and each read to the people. Their proclamations signal the beginning of a vast new era. One man is Ezra the scribe, and the other is Jesus of Nazareth. Four centuries separate their readings.

The scribe Ezra, in the First Reading is in Jerusalem after the return of the Jewish exiles from captivity in Babylon.

Ancient Israel was captured by the Babylonian empire 586 years before Christ. They took Jerusalem itself. They demolished the great temple built by Solomon centuries before and deported all productive citizens to Babylon, leaving peasants to run the holy city, if they could.

After fifty years or so of their captivity, Cyrus the Great, king of Persia (now Iran), came into possession of Babylon and he let the captives go. Many had switched their faith by this time in favour of foreign gods and customs, but the remainder, perhaps 5000, made ready to return home. By this time a lot of them had never even seen Jerusalem.

They arrived to find Jerusalem a ruined city with widespread moral decay.

Reconstruction of an urban centre is immensely difficult, as we know from our own day. Ezra worked long and hard to bring back the ecclesiastical and civil fibre of Jerusalem and the nation.

At last, a new temple was finished in 516 BC, and the ruined city walls were rebuilt.

At this point, Ezra stood upon a high wooden platform built for the occasion so he could be heard and seen, and he “read plainly” from the scroll that held “the book of the law.” He started reading at daybreak and continued until midday!

Not only did they have their city again, but also, they now had heard the Word of God again. And finally, there was again a temple where they could worship.

Their new era had begun!

Four centuries later Jesus of Nazareth made a similar return. He is going back to Galilee, the region where he grew up (Lk. 4: 14 – 21). He has been baptized and has spent time in the desert. His trip is now “in the power of the Spirit,” Luke says, and it takes him to his hometown of Nazareth. Like Ezra, he takes up a scroll, this one containing the book of Isaiah—much of which, coincidentally, had been written during the Jewish exile.

He reads the passage, which says that the Spirit of the Lord has sent him to “bring glad tidings to the poor, … to let the oppressed go free,” to proclaim a time of favour from the Lord ( Is. 61:1 – 2). This is what Ezra had done centuries before the proclamation by Jesus.

Each proclaimed a new era.

An interesting detail is that we leave Ezra standing on a high platform” the scribe Ezra stood on a wooden platform that had been made for the purpose . . . , he opened the book in the sight of all the people for he was standing above the people.” (8:  4 – 6). Jesus, on the other hand, having stood and proclaimed, sat down, “ he rolled up the scroll, gave it back to the attendant and sat down.” (v. 20) He sits down, now,, at the same level as the people, and from there states, “today this scripture passage is fulfilled in your hearing.” (v. 21)

His mission is to rebuild their hearts, not just their city, to return them to God, who is their real home. That rebuild begins with Jesus sitting among the people.

I am reminded of the words of Pope Francis during his homily at the Mass of Chrism on March 28, 2013, in St Peter’s Basilica. While the Pope was addressing priests in particular, his words may be of value to each of us. 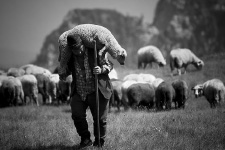 “This is what I am asking you,” he said with emphasis, looking up from his prepared text, “be shepherds with the smell of sheep,” so that people can sense the priest is not just concerned with his own congregation, but is also a fisher of [men].” Maybe, as our dioceses begin work on the Synod, they might well imagine a new definition of synodality  – that definition being, for one and all members of the Body of Christ, “ be shepherds with the smell of sheep.”