In our First Reading this Sunday we continue with our reading from the Book Of Genesis. I would like to take you back to our Frist Reading from last Sunday from which this Sunday’s follows on.

Their first instinct is one of invitation and hospitality—to create a space of food and drink for their guests. Here we have humanity feeding God; it will take a long time to turn that around in the human imagination. “Surely, we ourselves are not invited to this divine table,” the hosts presume.

This story inspired a piece of devotional religious art by iconographer Andrei Rublev in the fifteenth century: The Hospitality of Abraham, as it was originally named, or simply The Trinity as it has come to known. As icons do, this painting attempts to point beyond itself, inviting a sense of both the beyond and the communion that exists in our midst

The icon shows the Holy One in the form of Three, eating and drinking, in infinite hospitality and utter enjoyment between themselves. They are eating because Abraham and Sarah have provided food for them. They all share from a common bowl provided for them. Notice the hand of one of the figures points toward the open and fourth place at the table. Is this hand inviting, offering, and clearing space? I think so! And if so, for what, and for whom?

Icons are often referred to as windows, as an opening.    If you look on the front of the table, there appears to be a little rectangular hole which you can hardly notice. Art historians say that there was perhaps once a mirror glued onto the front of the table!  If so, then maybe Rublev had in mind the words of St. Paul: “All of us, with unveiled faces, seeing the glory of the Lord as though reflected in a mirror, are being transformed into the same image (icon).” (2 Cor. 3:18). Those who looked at the icon when it was first written would have seen themselves reflected in the icon.  They would not just be looking at an icon, or looking beyond it as through a window, but they would see themselves being invited to join those already gathered around the table. 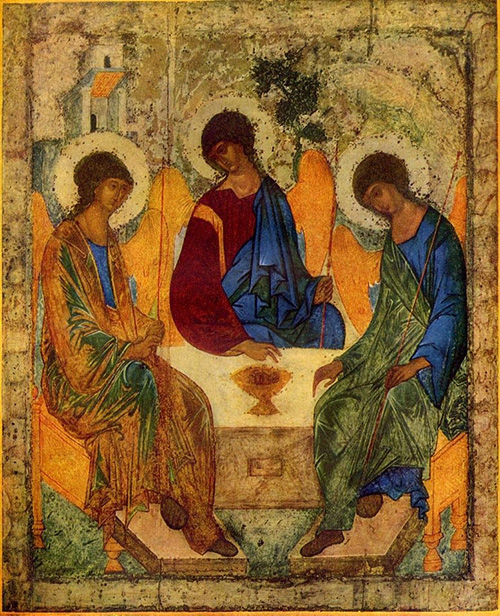 Andrei Rublev wrote The Hospitality of Abraham in 1411 for the abbot of the Trinity Monastery in Russia. The icon is currently held in the Tretyakov Gallery in Moscow.