Once upon a time the mayor of a town invited all the people of the town to a banquet.

Among those who showed up was a man of great distinction.

His name was Daniel.

Daniel had taught at the university for many years; Daniel had also written and published many books.

As well as being a great scholar, Daniel was also very wise, and this wisdom brought with it a real sense of humility.

Daniel knew that he knew a lot, he also knew that there was an awful lot he didn’t know.

When he arrived, the mayor greeted Daniel and invited him to the top table, “we have a seat ready for you,” exclaimed the mayor.

Daniel thanked the mayor but said he would find his own seat, and, you may have guessed, Daniel chose to sit at the back of the hall, among the poor.

When other distinguished guests arrived, they were shown to the top table.

Eventually, the banquet hall was filled.

Then, suddenly, at the last minute, a very distinguished person arrived.

The mayor had no option but to take the man to the only vacant seat – a seat next to Daniel.

“But this is the bottom table,” the man protested.

“No, this is the top table, “ the mayor replied.

Each Sunday, we are invited to a banquet – the banquet of the Eucharist.

Here Jesus is the host, and we are his guests.

Here there are no special places, you can sit where you wish.

Here privilege, status, title, and rank have no meaning.

Differences count for nothing.

In the kingdom of God every place is a place of honour. 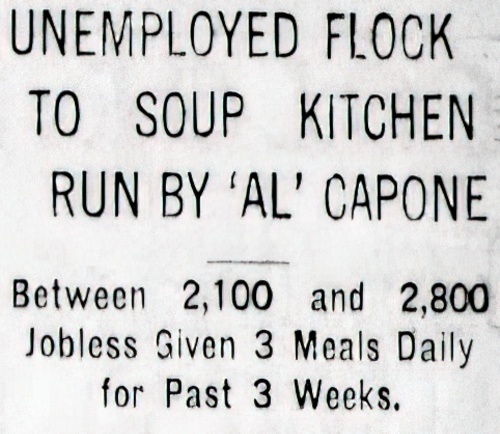 The notorious gangster Al Capone opened a soup kitchen during the Depression.

On Thanksgiving Day 1930 more than 5,000 hungry men, women, and children were fed with a hearty beef stew.

The kitchen was demolished in the 1950’s but used to be located at the corner of 9th and State Street, in Chicago, Illinois.

The site is now a parking lot.