The gospel reading for this Sunday is the entire 15th chapter of Luke’s gospel.

It appears to be all about ‘lost property’: the lost sheep, the lost coin and the lost son.

This is bound to strike a chord with all of us, because who hasn’t lost something at some stage, an item of clothing, glasses, the TV remote! There are some of us who, when travelling in an unknown land has not driven around the same traffic island while looking for the exit or the appropriate road sign!

Jesus told these three stories in response to the Pharisees who accused him of consorting with sinners – people who had lost their way.

But to be more exact, these parables are not about being “lost”, but about being “found.” Each of them underlines the joy of the finder: God’s joy in seeking and finding what is lost. ‘Rejoice’ is the key word at the end of each story. These stories are Jesus’ revelation of what God is like. He had a vivid imagination and could have invented any kind of story, but he invented these.

The Dutch artist Rembrandt Van Rijn (1606 – 1669), commonly referred to simply as Rembrandt, painted the Gospel story of the Prodigal Son. Titled “The Return of the Prodigal Son”, it is one of his last paintings, completed some two years before his death. The artwork now hangs in the Hermitage, St. Petersburg.

Frequently, reproductions of this artwork hang in Reconciliation rooms in churches. However, many such reproductions are of poor quality and hide what I consider an essential element of the painting and an element which says much to me about the nature of forgiveness. 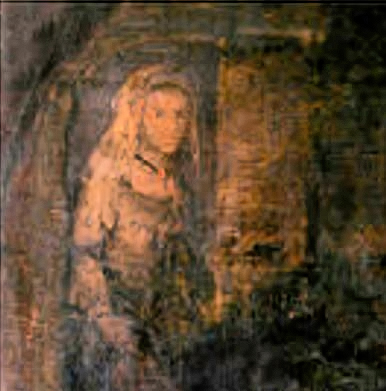 The top left of the picture, from a viewer’s looking stance, is very dark and reproductions lose a figure Rembrandt has painted – in the top left corner there is a woman! Is this figure incidental to the painting (after all she is not mentioned in the Gospel story), or rather is Rembrandt inviting the viewer to take a second look, to pause and consider that there is a very important feminine element to the nature of forgiveness.

When you cut the picture in half there is a very definite link between the woman figure (at the top), the right hand of the father (left when we look at the painting), a hand which looks feminine, and the receptive shoulder of the returned son.

Do you remember a visit to the confessional when you were young (and maybe still today!), and during your preparation time trying to remember how often you pinched your brother or sister, how many times you disobeyed mum and/or dad, how often you told a lie, how many impure thoughts you had – because the priest was sure to ask you, “how many times?”. How many times is a masculine question, the masculine deals in numbers, in quantities. Of course, if my God is masculine only, then getting the right numbers is important. The feminine is more immediately concerned with warmth and presence and welcome – the number of times does not effect the quality of welcome/forgiveness.