The shepherds were Jews, the wise men (or Magi) were non-Jews, or Gentiles. The word epiphany means a manifestation or revelation. Literally, ‘a drawing back of the veil.’ On this day the veil is drawn back on a great mystery, namely, that Christ is the Saviour of all people. Today is the feast of inclusivity. It is God’s will that all people be saved and come to the knowledge of the truth. God invites all to share on equal footing the benefits of the saving actions of Christ. This feast shows that election by God is not a privilege for some, rather a hope for all. It puts an end to every kind of exclusiveness.

In Jesus own mission he reached out to those excluded by the society in which he lived; the poor, the diseased, women and children. He reached out to Samaritans, Canaanites, foreigners, and every manner of social outcast. He angered the Jewish leaders by telling them that the Kingdom of God was open to everyone. The news that the Gentiles would be accepted on equal terms as themselves caused shock and bewilderment to the Jewish leaders. This great and wonderful truth was revealed in embryo when the Magi came to honour the Christ child.

Are all welcome, as equals, in our Church, irrespective of race, gender, age, sexual preference, ability or disability? If not, why not? Is the barrier not in them; rather, might it be in me? 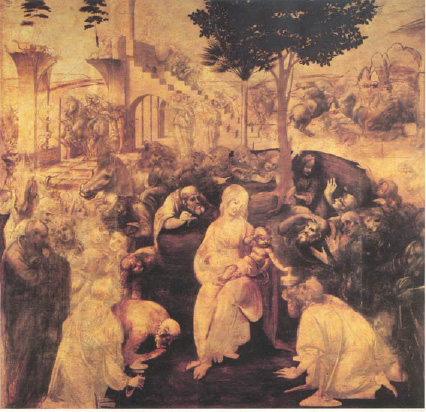 There is in Matthew’s account of the visit of the wise men/Magi a much-neglected sentence. Matthew ends his account with the words,” they left for their own country by another road.” (v12). The encounter with Emmanuel, God-with-us ought to send us ‘home’ by a road other than the one that brought us to Him.

The illustration hints at that: titled “The Adoration of the Magi” it is by the Italian Renaissance artist Leonardo da Vinci. Leonardo was given the commission by the Augustinian monks of San Donato, Florence in 1481. Da Vinci departed for Milan the following year, leaving the painting unfinished! It has been in the Uffizi Gallery in Florence since 1670. Maybe the picture is “finished” when you and I kneel, adore, and then return ‘home’ by another road.!

Note: The painting underwent a five-year restoration process which involved the cleaning away of the layers of non-original materials that had built up on the surface over time. Equally important for the painting’s future conservation was the restoration of the wooden support and its stretcher bar system, improving the wood movement control function while respecting the original structure.