Then the Lord said, ‘come no closer!

Remove your sandals from your feet, for the place on which you are standing is holy ground.” (Ex. 3: 5)

Remember those summer days of childhood when shoes were an accessory?

Whether it was grass filled with prickles, the road with its tar melting, the sand at the beach too hot to run on (unless you ran really, really fast, heading for the sea and yelped at the top of your voice!).

On those days we felt the ground, the ground was holy! 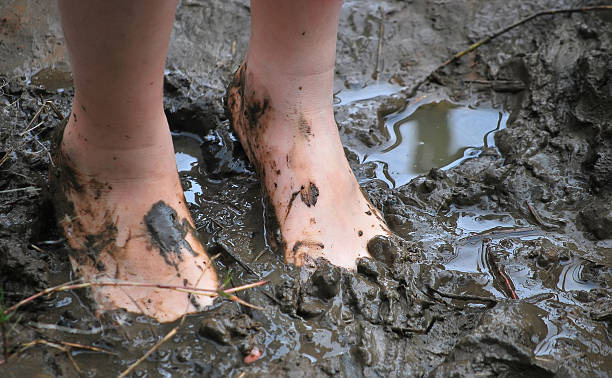 Then there were those wet, muddy days when it was hilarious to stand among the mud and feel the sensation as it squeezed between your toes.

On those days we felt the ground, and the ground was holy!

Today, the grass still has prickles!

The tar carry’s on to melt under the summer sun! the sand continues to bake red hot under the summer furnace! The mud still squelches when it is wet! “Nor can foot feel being shod” (Gerard Manley Hopkins, from God’s Grandeur)

The Irish author and poet, John O’Donohue speaking  in a radio interview shortly before his death commented, “I think it makes a huge difference, when you wake in the morning and come out of your house, whether you believe you are walking into dead geographical location, which is used to get to a destination, or whether you are emerging out into a landscape that is just as much, if not more, alive as you, but in a totally different form, and if you go towards it with an open heart and a real, watchful reverence, that you will be absolutely amazed at what it will reveal to you.”

A part of the Celtic imagination that John O’Donohue had come to intuit was that landscape wasn’t just matter, but that it was actually alive.

The world is charged with the grandeur of God.

It will flame out, like shining from shook foil;

It gathers to a greatness, like the ooze of oil

Crushed. Why do men then now not reck his rod?

And wears man’s smudge and shares man’s smell: the soil

Is bare now, nor can foot feel, being shod.

And for all this, nature is never spent;

There lives the dearest freshness deep down things;

And though the last lights off the black West went

Because the Holy Ghost over the bent

World broods with warm breast and with ah! bright wings.

“Nor can foot feel, being shod” writes Hopkins.

O’Donohue asks the question, “What gives the person the right to intrude on this place?”

If I take ‘remove your sandals’ as a metaphor, the obvious question is (and so obvious we dare not ask it, because then it will persist until we, stumbling, attempt an answer!) – the question is ‘what do I need take off to meet my God?’

Do I dare take off that protective shield that ‘foot can feel again’? And feeling, experience my God?