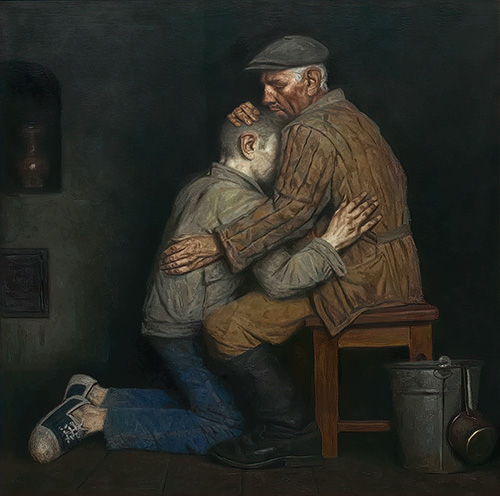 In most print editions of the Gospels, the story is headed that way, some add ‘his older brother’ to the mix.

None, I have read and/or made use of has mentioned the father.

New Testament scholar, N. T. Wright in his commentary on this story has the title ‘The Running Father’.

Wright explains that what instantly caught the attention of the hearers of the story were the words, “but while he was still far off his father saw him and was filled with compassion; he ran and put his arms around him . . .” (Lk. 15:20).

“He ran;” a seemingly incidental phrase in the helter-skelter lifestyle of today.

We run for the bus, to the train, out of the rain, and on occasions to the clothesline as the heavens open on our almost dried washing!

In the culture of Jesus, grown men did not run!

Another point we may well overlook when we spend too much time on the younger son is found in the line, “this son of mine was dead and is alive again!”

While the phrase is about the younger son being dead, it is equally true of the father himself.

Again within the culture of the time, the younger son asking for his share, ‘give me the share of the property that will belong to me’ (v.12) is wishing that his father is dead!

The personal and social shame for the father is extreme.

With the return of the younger son to the family home, indeed the father can exclaim with equal veracity for himself, “I was dead and am alive again.”

Maybe, that is at the heart of our Sacrament of Reconciliation, not my/our returning, rather my God exclaiming, “I was dead and am alive again!”